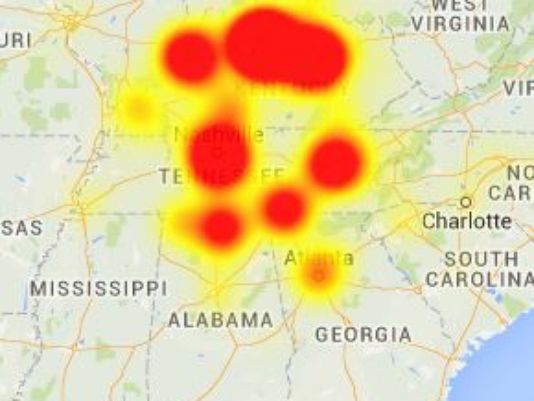 On August 4th of 2015 much of Kentucky, Tennessee and also parts of Georgia and Alabama lost AT&T voice and data service. This was not an isolated temporary event. This was widespread outage that lasted for several hours. For all of us that depend on mobile communications to do our jobs we were essentially off the grid and we had no idea how long it would last.

If you have read some of my other posts you know that I use AT&T for my iPhone carrier. The main reason for this is as a home inspector, I need the ability to use both voice and data at the same time to complete my home inspections. Unfortunately on August 4th neither my voice nor my data service was working and I was a little upset.

I had been doing a home inspection and had already collected most of the data, taken my photos, and completed my comments on my iPhone through the Tap Inspect app. Usually all this information ‘magically’ synchronizes with the Tap Inspect servers while I am doing the inspection but not that day.

At that point of my home inspections I typically grab my iPad, polish off the language and go over the report with my client. I love the amazement on their faces when they see the PDF on my iPad, watch as I publish the report, and then get the email notification on their own phones for them to pickup their home inspection report.

On August 4th I was out of luck. Or so I thought…

A little while back we wrote about 5 Reasons not to buy a WiFi only tablet. I follow our own advice and bought an LTE iPad. I bought a Verizon iPad.

There has been more than one time I have been in areas and had poor signal. Call me paranoid but I figured that if AT&T was bad in an area I could always use a Verizon iPad. If Verizon was bad, I still had my AT&T iPhone. I could always use the hotspot feature from the other device to connect to the internet.

On August 4th, AT&T service was very bad. Thankfully I had my Verizon iPad. I connected my iPhone to the iPad’s hotspot, synced with the Tap Inspect application, and finished up with the iPad, and amazed my client as usual.

So, how did I survive the AT&T outage? Simple, I used my Verizon iPad.